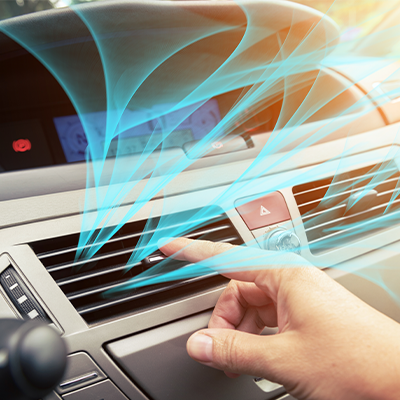 Removal of fungi from an air-conditioning system is very important for our health. It is recommended by all national health institutes. Due to big temperature differences, an air-conditioning system is conducive to the development of micro-organisms and bacteria, particularly harmful for our respiratory tract. As you use your car on a daily basis, you must ensure that its air-conditioning system is always clean. Long-term exposure to the bacteria which develop in the process of cooling or heating the cabin may have a huge impact on your health; therefore, anti-fungal treatment and cabin filter replacement are so important. Fungi can be removed in two ways: by means of an antibacterial foam or 1.7 MHz ultrasound, the latter method being more effective.

**Prevention is better than cure - this proverb more than accurately explains why you should regularly have your car's air-conditioning subjected to anti-fungal treatment.

Most of the microbiological contaminants entering your car through a dirty air-conditioning system (all types of air-conditioning) are not harmful for humans in the event of an occasional exposure. But what if you breathe them in on a regular basis?

For example, at the office or when driving a car? This is when you are exposed to bacteria even for a few hours. They may be particularly dangerous when coupled with decreased immunity caused by an illness or e.g. the autumn fatigue. This is when contact with a fungi-infested air-conditioning may be very harmful for your health.

The National Hygiene Institute has for several years warned drivers that an untreated air-conditioning system is conducive to illnesses. The World Health Organization has placed breathing disorders caused by air-conditioning at the top of its list of lung-threatening factors. Unless filtered properly, conditioned air may be very harmful for humans.

The number one threat are allergies. Fungi and mould may cause the body to react more acutely to other allergens, such as pollen, dust, mites or animal fur. In other words, when breathing conditioned air, a potential allergy sufferer puts their system at a high risk of serious problems.

Another health problem are lower and upper respiratory tract diseases. In extreme cases, breathing conditioned air containing fungi and mould you may develop a fungal pneumonia.

Fungal and mould metabolites are considered to be an exceptionally strong natural poison. They cause not only allergies or breathing problems, but also fungal skin infections. An unclean air-conditioning system poses a serious risk of legionellosis - a lung disease caused by bacteria found in wet ventilation systems.

How do fungi make their way into a car-air-conditioning system? A car air-conditioning system operates in highly volatile conditions - it is exposed to a wide range of temperatures, varied humidity and contaminants sucked in by the fan. All this is conducive to the development of mite and mould. Due to water condensation, air ducts are an ideal place for bacteria, fungi and other microorganisms. They are responsible for the specific musty odour coming out of the air ducts.

This odour is a clear sign that your air-conditioning system definitely needs cleaning. The irritating smell is caused by fungi and mould growing on the evaporator - a hidden, wet component of the air-conditioning system, constituting an ideal habitat for microorganisms. The smell is then blown into the car by the fan. This way the poisonous substances get into the lungs of unaware passengers and the driver.

Removal of fungi from an air-conditioning system

The whole process of an air-conditioning system cleaning takes about one hour, unless other problems come up. Fungi and other microorganisms can be removed in the following ways:

Microorganisms can be destroyed by injecting a fungicidal foam or spray into the ventilation ducts. It is left inside the air-conditioning system with the air recirculation mode on. The preparation is entered through the ducts toward the evaporator.

A foam is the simplest, the most common and the cheapest way of getting rid of fungi from your air-conditioning system. Although the preparation destroys microorganisms, it does not guarantee 100 per cent efficiency, as it is unable to reach every single element of the evaporator.

Fungi may also be efficiently removed by means of a special device capable of generating 1.7 MHz ultrasound, which turns into a mist, filling the entire car and the evaporator. This way the preparation reaches otherwise inaccessible places and is much more efficient than the typical chemical substances. What's important, this method can only be applied with substances intended for use with the ultrasound. First, a typical fungicidal liquid is applied, followed by a substance which gets rid of the unpleasant smell.

Another popular solution is injecting ozone into the car interior. This method requires specialist equipment - a nitrogen generator, which can be found at professional garages specializing in air-conditioning systems. Nitrogen is a powerful oxidizing agent and a bactericide. It can be used not only to remove microorganisms from a car, but also to get rid of unpleasant smells. The process takes only an hour and costs up to several zlotys, depending on the car.

There are also preparations that you can use on your own, however, they are not very efficient, unlike the professional methods applied by garages.

A professional air-conditioning system treatment is offered by the Motointegrator Chain garages. This is the biggest platform in Eastern Europe associating nearly 5 thousand specialized garages. Use the search engine to find the nearest garage offering air-conditioning-related services.

How often should an air-conditioning system be cleaned?

For your own health - as often as possible. In order to limit the growth of microorganisms posing a threat to human health, you should have your air-conditioning system cleaned at least once a year.

If you don't do it, you will end up having an unpleasant smell in your car, and, what's much worse, health problems, not to mention the negative effects a poorly operating air-conditioning system has on your car.

In extreme cases, the evaporator may be in such a bad condition that it may have to be removed for disinfection. This element is hard to get to, so the costs of this operation will certainly not be low.

A malfunctioning air-conditioning system may cause a build-up of dust and other pollutant in the cabin filter, which, in turn, will put more strain on the engine, resulting in e.g. a failure of the fan.