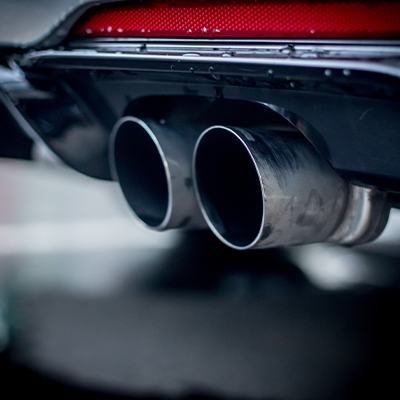 The catalyst is an exceptionally costly component. Its replacement may cost even a few thousand zlotys. Unfortunately, in many cases it is impossible to use a cheaper alternative to the catalyst recommended by the manufacturer. All depends on how complex your exhaust system is. A worn catalyst affects engine operation and causes a distinct smell of hydrogen sulphide to get inside the car. If this is the case, the catalyst requires changing.

What is the role of the catalytic converter?

How does the catalytic converter work?

Most petrol engines are equipped with three-way converters, which reduce the nitrogen oxide emission and oxidise hydrocarbons and carbon monoxide to water and the less harmful carbon dioxide. The converter is shaped like a metal tin with a honeycomb-like structure inside, covered by a substance which reacts with the exhaust gases. Gradually, the converter burns out and becomes useless. A malfunction of the fuelling system may cause the inside of the converter to melt, resulting in its clogging and, consequently, an engine surge.

How is the converter replaced?

The converter is replaced much the same way as the silencer. Depending on the type of fixing, clamping rings with screws or welded joints are applied. A worn converter should be recycled, as some of the substances contained in it may be reused to produce new converters. Driving with a faulty converter may cause engine damage. The sensors installed in the exhaust system detect wrong composition of the exhaust gases and cause the injection controller to change the fuel-air mix type. This may cause damage to valves, their seats or pistons.

How to tell a converter malfunction?

You can tell it by a distinct odour of hydrogen sulphide coming out of the exhaust pipe.