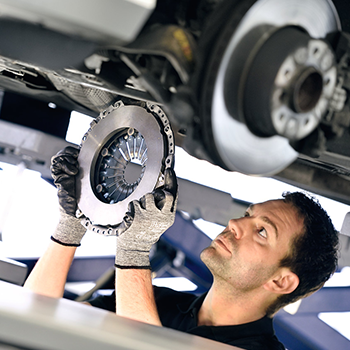 The clutch engages or disengages the drive between the engine and the transmission. If it weren't for the clutch, you would be unable to pull away smoothly, change gears while driving or keep the engine on after stopping. The clutch is comprised of a disc, a pressure plate pressed against the flywheel, and a thrust bearing. The pressure exerted by the pressure plate on the disc ensures efficient cooperation between the two elements. If it is too low it causes quicker wear of both elements. You can tell that they are worn by a strange noise produced upon pressing the clutch pedal. Sometimes the pedal is hard to press and you have difficulty changing gears. If you ignore this symptom, you may ruin the gearbox or the engine.

The friction lining of the clutch plate gradually wears out, causing the plate to slip and preventing it from transmitting the torque from the engine to the other elements of the drive unit. If this is the case, the clutch must be replaced, which requires disassembling the gear box. Cars equipped with a front wheel drive require detaching the suspension and removing the half-shafts. Cars equipped with a rear wheel drive require disconnecting the transmission shaft in order for the gear box to be removed. Next, the pusher plate is unscrewed, followed by the removal of the clutch plate. As the useful life of the pusher plate springs and the thrust bearing is limited, these elements must be changed together with the clutch plate, as together they comprise the clutch assembly.

In cars in which the clutch is controlled by means of a hydraulic system instead of a cable connected to the clutch pedal, the clutch slave cylinder must also be replaced. When fitting a new clutch, you should also check the level of wear of the flywheel surface. If your car is equipped with the so-called dual mass flywheel, a good idea is to replace it along with the clutch, as it gradually wears out, too. After changing the clutch you should have the hydraulic clutch control system deaerated and a test drive performed to check if the drive system operates properly. It is difficult to determine when the clutch should be replaced, nevertheless in a typical car driven mainly in the city this component becomes worn after about 100 thousand kilometres."